Laughing at Danger: This 1924 Major Motion Picture Was One of the First Motion Pictures to Feature a Bureau of Investigation Character 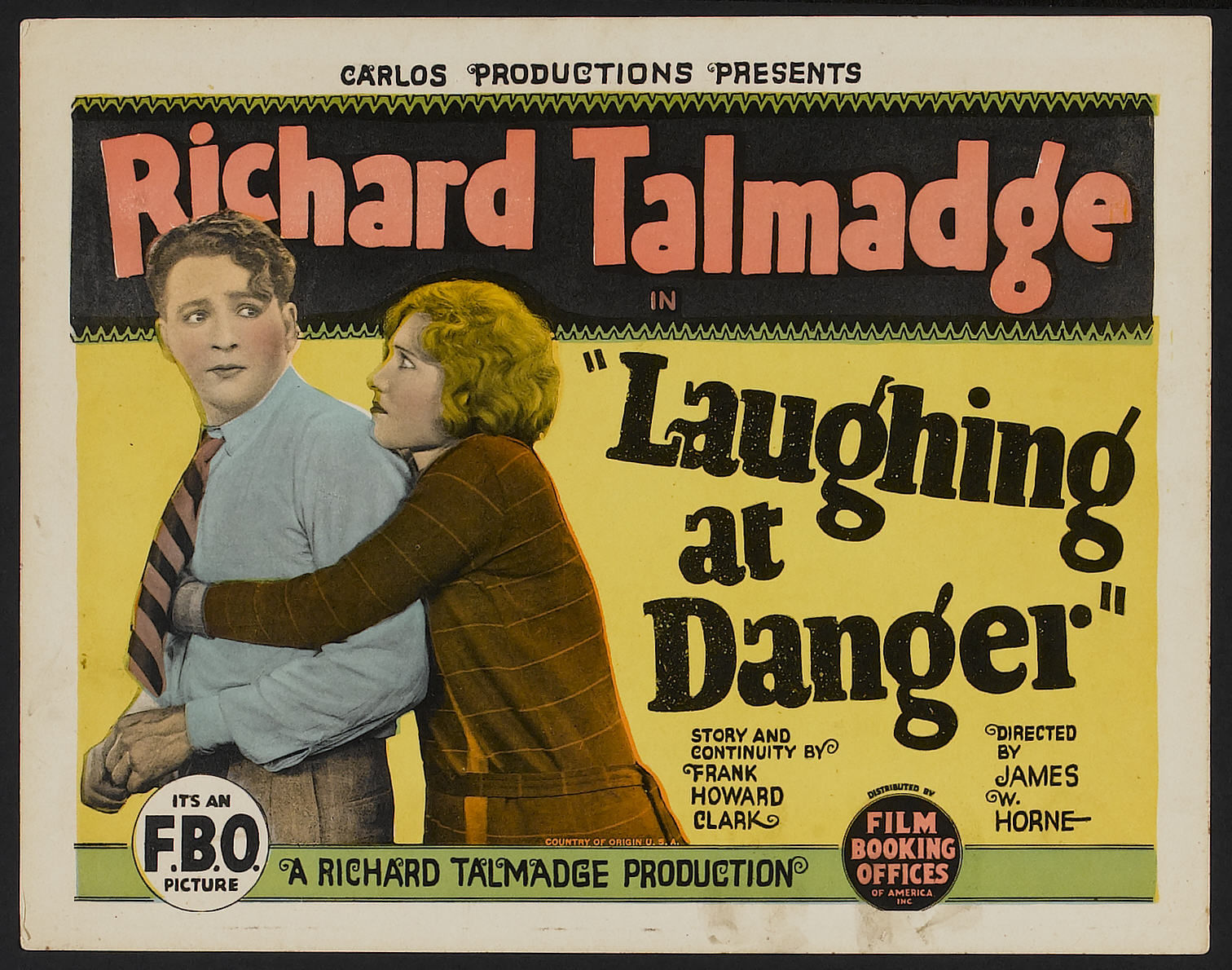 It is common today for the Federal Bureau of Investigation to be portrayed on screens large and small. Any day of the week and around the clock, there is a television show, documentary, or motion picture about the FBI being shown somewhere.

But when did the FBI (more accurately, its predecessor organization named the Bureau of Investigation and called the BOI) first appear in a motion picture? When was the first major motion picture about the FBI/BOI or an FBI/BOI character filmed and released?

Although available public records are not centralized enough to give definitive answers, a 1924 motion picture entitled Laughing at Danger certainly was one of the first.

The Bureau of Investigation and Hollywood Come into Existence

In the first decade of the Twentieth Century, political, social, technological, cultural, and economic forces gave rise to momentous changes and advancements in life in the United States and abroad. Inventions as diverse as affordable automobiles, the powered controllable airplane, radio broadcasting and the radio receiver, dirigibles, the vacuum cleaner, radar, electrocardiogram, air conditioning, plastic, and the electric washing machine all came into existence.

The Progressive Era (1896-1916) also saw significant new thinking in society on how to solve a spectrum of issues. This gave rise to the creation in 1908 of a new “investigative force” (renamed as the Bureau of Investigation in 1909) on the Federal Government level to combat crime and public corruption. Simultaneously, the new film production industry benefitted from advances in equipment and techniques.

Motion pictures became the rage, and the industry grew with stunning speed. Thousands of films were made in the decades immediately following the creation of this new business. The Bureau grew more slowly but nonetheless grew steadily and expanded, opening offices in various cities nationwide.

The motion picture industry in the United States began primarily in New Jersey, New York, and Pennsylvania before relocating primarily to Los Angeles, California to take advantage of its very favorable climate. The decision was made to build in an existing area in the central part of the city. The general location was known as Hollywood, and the first motion picture studio in that area was established in 1911.

It was inevitable that over time the work of the Bureau would attract the attention of Hollywood. By the World War I era and the early 1920s (which by then had J. Edgar Hoover in its ranks), it was involved in combatting not only crimes such as automobile theft and white slavery but also sabotage and espionage.

The plot of Laughing at Danger was written as a Comedy-Drama. The lead character (Alan Remington, played by established actor Richard Talmadge) in the one-hour long black and white movie is not a Special Agent in the BOI, and the BOI character does not appear until the final minutes of the movie when he arrests two of the major spies and would-be saboteurs.

The film is from the Silent Film Era (1894-1929), which means it has no soundtrack for dialogue or music. Subtitles are shown periodically on the screen as the movie plays. The capability for sound was not added to most motion pictures installed in theatres until later in the 1920s or early 1930s.

Available records reveal that filming for Laughing at Danger began in 1924 and it was released on Sunday, November 23, 1924. Back then, a Sunday commonly was a day off. Thanksgiving Day was the just days away, on November 27. It would have been a festive time to release a new Comedy-Drama motion picture in theatres.

The story opens with Alan Remington, the 30-ish son of a wealthy Washington, DC politician/diplomat named Cyrus Remington, being chauffeured to visit a woman he loves. Alan has had a string of failed romances but thinks he has found the “right one” this time. He has an engagement ring in his pocket and plans to propose to her. When he arrives at her large home, a butler lets him in. Alan discovers she is in in the living room on a date with another man.

Alan falls into a deep depression, dejectedly gives the ring to the butler, and walks home in a rainstorm.

In the following weeks, on the advice of inventor and Professor Leo Hollister, from whom he purchased a new powerful death ray to be used for national defense purposes, the elder Remington attempts to cheer Alan by providing him with some excitement and diversions. At this same time, a group of foreign agents, led by Cyrus Remington’s own treacherous male secretary Darwin Kershaw, kidnap Hollister and his daughter Carolyn, and steal the death ray for nefarious purposes. (A matter certainly right up the BOI’s alley.) However, the quick-thinking Carolyn removes the insertable control key and tosses it out an open window. The key (which looks like a wind-up clock mechanism) hits Alan Remington in the head as he is parked in his car below. He has no idea what it is. The foreign agents see where the key hit, and they begin to pursue the young Remington. He sees them pursuing him without knowing who they are or what they want, uses his acrobatic skills to elude them, but assumes they have been hired by his father to jolt him out of his sadness. 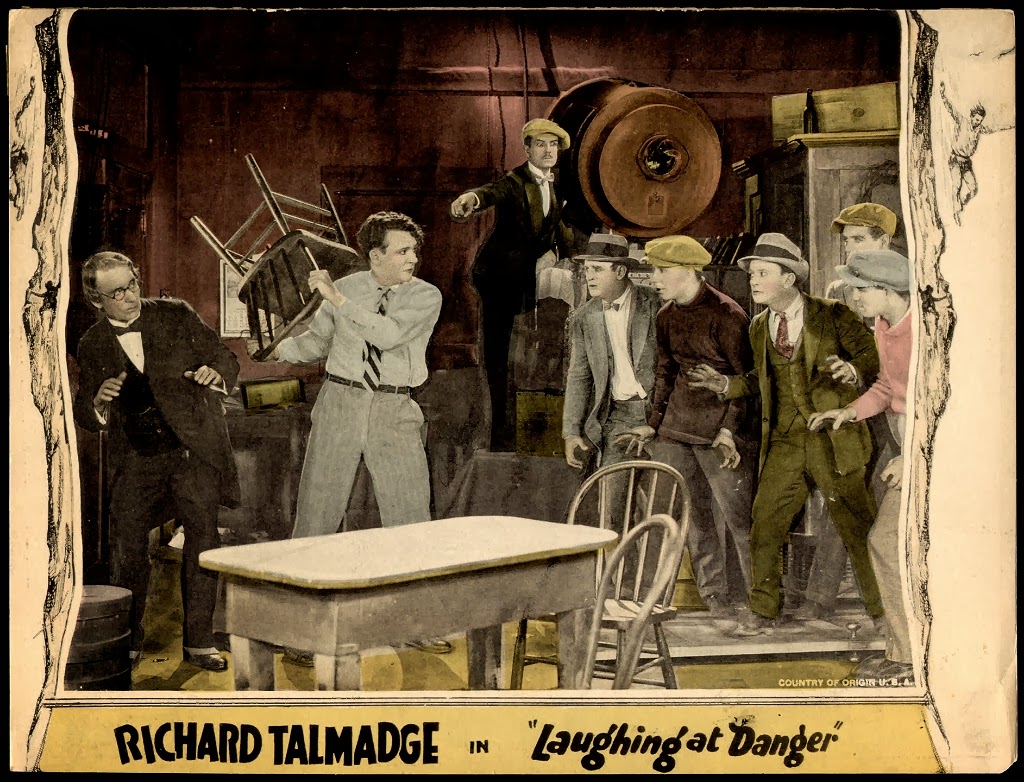 He thinks it is a good joke and laughs at all of it, which is where the movie Laughing at Danger gets its title.

It eventually dawns on Alan that the unknown men are seriously trying to capture or kill him. He gets serious too and turns the tables on them in a small building which contains the death ray machine (which resembles a spotlight) and overlooks the ocean. (This motion picture obviously was filmed near the film industry in Los Angeles, California.) The professor and his daughter are still being held captive in the building. The foreign agents, though, get the key, insert it, turn it on, and are about to activate the death ray machine. They intend to train it on and destroy United States Navy ships in the ocean close to shore. Alan Remington jumps into action, destroys the death ray machine by shooting out its high intensity light bulb/death ray, rescues the Hollisters, saves the ships just before they fire on and destroy the building, and knocks the foreign agents out of action until the police, his father, and the BOI Special Agent arrive.

At minute 58 of the 60-minute move, the two main enemy agents are taken into custody by the sole BOI Special Agent wearing the typical hat and business suit of the era.

The movie draws to a close as Alan and Carolyn embrace, and a caption pops up stating “Let’s kiss so the audience can go home.”

The American Film Institute (afi.com) in Los Angeles, which maintains records of most motion pictures, states that the arresting law enforcement character is an FBI Special Agent. (The Special Agent actually would have been in the BOI since the name FBI was not adopted until 1935.) The arresting Special Agent appears at about minute 58 of the one-hour movie as he takes the bad guys into custody.

Unfortunately for our purposes, the name of the middle-aged actor who plays the BOI Special Agent is not in the list of credits.

The other main cast members in this film (Cyrus Remington/Joe Girard), (Professor Leo Hollister /Joseph Harrington), (Carolyn Hollister/Eva Novak), (Darwin Kershaw/Stanhope Wheatcroft), and (Killer Murphy/Bull Montana) all were well known in Hollywood during and after this film was made.

The movie was and is rated “average” by visitors to the Internet Movie Data Base (imdb.com) but nonetheless is entertaining and worth watching for fans of the Silent Film Era.

The movie was made by Carlos Productions, Inc., which went out of business long ago following the death of its founder. There were many small film production companies in the early decades of Hollywood and Carlos was one of them.

Who Was Richard Talmadge?

Born in either Germany or Switzerland in 1892 as Sylvester Ricardo Metzetti, he came to the United States and found his way to Hollywood in 1910. He was of Italian-Swiss heritage, and he and two brothers became acrobats and stunt performers. At one point, he was the stuntman for Douglas Fairbanks, Sr. He eventually became an actor himself, appearing in his first film in 1921. Sylvester took the stage name of Richard Talmadge. He also went by the name of Dick Talmadge.

He acted in in at least 20 films, but after his onscreen career faded he went into other work as a director, producer, writer, or stunt double. He never got to play an  FBI or BOI Special Agent, however. He was active in the film industry until the 1960s, and died in 1981 in Carmel, California.

There have been hundreds of major full-length motion pictures with main or secondary characters portraying FBI Special Agents and other FBI personnel in the century since Alan Remington and the uncredited BOI Special Agent thwarted their band of bad guys. Most of these motion pictures have been good, some not so good. Some are made with FBI assistance, some not.

Nonetheless, motion pictures about the Federal Bureau of Investigation and its work always capture the attention of the general public. Obtaining justice always has been of interest to all of us, and it always will be so.

To watch Laughing at Danger in its entirety, follow this link here on FBIOGRAPHY: Videos and Documentaries

The film also can be purchased on a DVD by following this link: Laughing at Danger

“WILL:” The Autobiography of G. Gordon Liddy